The Film wil be followed by a short Q&A with director Stuart Swezey and artists central to the film and music movement, conducted by former Desert Sun arts and entertainment writer Bruce Fessier.
Directly following the screening and Q&A will be a live concert performance in the Annenberg theater by YAWNING MAN.
http://yawningman.com/ 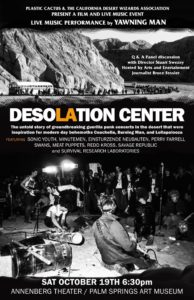